I love running 100 mile races.  And one of my favourites takes place this month.

The Sulphur Springs Trail Run is held in the Dundas Valley Conservation Area in Southern Ontario.  The race follows a series of hard-pack trails that weave in and out of steep gorges carved thousands of years ago by retreating glaciers. Over the course of the 20-kilometer loop (which you run 8 times), you pass through dense Carolinian forests and wildflower-strewn meadows. 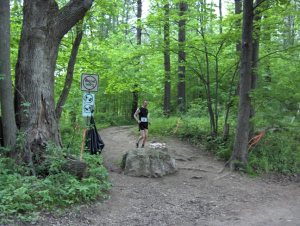 To answer your question, yes, there’s a bit of hill-climbing.  Over the course of the 100 miles, you have to gut your way up 4600 metres of elevation.  That’s like 8 CN towers stacked on top of each other.

Sadly, I won’t be running the race this year.  Instead, I’ll be working this mind-blowingly awesome music festival.  It’s a decent trade-off, but I’ll still be thinking about Sulphur Springs while I’m rocking out.  I’ve said before that every 100-mile race holds a surprise of some sort, and I’ve had more than my share in that particular race…

For instance.  Five years ago I was toeing the starting line with a hundred or so other runners.  It was late May, and it was six in the morning, and most of us were wearing headlamps.

“Yaaaaaaaaa!” we runners yelled, charging heroically into the darkness.

We ran for maybe 30 seconds, down a gravel road toward the trailhead. Everyone jostled for position as the road got narrower, and soon we were funneling into a straight line.

Did I mention that it was dark?  That we were moving fast?

Four metal posts were sticking out of the ground.  They were two-and-a-half feet high.  Castration height.

The crowd parted, and I slipped safely between the posts. The guy beside me wasn’t so lucky, and went down with a horror-movie scream.

IN EVERY RACE THERE IS A SURPRISE.

Happily, the following year, the starting line was moved to a different area of the park.  I have no idea if that was coincidental or not.

Running a hundred miles is not like running shorter distances.  In the 100 mile race, you don’t compete with other people.  You compete against yourself.  More precisely, you compete against your own mind.  You would think that your mind would be on your side in an endurance event.  But it is not.  Your mind is your worst enemy.  Your mind is on the side of your body, and your body wants nothing more than to go home, lie down in a hammock, and eat a bag of barbecue chips.

Oh sure, every now and again, your mind will say something nice to you, like: “The bath you take after this race sure is going to feel good!”  Or, “It sure is nice, being outside in the fresh air!”  But most of the time your mind says nasty things like: “You’re stupid for trying this; you should drop out and go home.”

That’s what my mind was saying to me a couple of years ago, when I was once again running Sulphur Springs.  I’d been running for 80-odd miles and it was the middle of the night and my mind was saying: “You are a stupid bloody fool.  Why are you doing this to yourself?”

I’ll never forget finishing my 7th loop. At the turnaround, the volunteer lady gave me a high five and offered me a slice of pizza.  I declined, since I still had one final 20-kilometer loop to do.  “No you don’t,” she said.  “You’ve already done your 8.  Just look at the clipboard.”

I stared at the clipboard, and counted the laps.  She was right, I’d done 8, not 7 like I thought.

Believe me when I tell you – that was the happiest moment of my life.

Of course, later that day, the pain really set in.  I had a burning Achilles tendon, and I lost all feeling in six of my toes.  My calves and left shin were…hmmm, let me see.  What were they exactly?  Ah yes, they were a blinding wall of pain.  That’s right, that’s what they were.

On the bright side, I was given permission to use the physical disability washroom at work.  That handle on the wall beside the toilet was a godsend.