Did I mention that I’m not in Boston right now?  That I won’t be running the fabled marathon on Monday?

I know; a total drag.  But I do have some choice memories of the event.

Back in 2007, along with 30,000 other hardy souls, I ran from Hopkington to downtown Boston through a howling nor-easter.  The storm was so violent that they shut the airport down.  The downtown hotel where I stayed teetered back and forth in the wind.   When I got up in the night to take a pee, there were whitecaps in the toilet bowl!

We had better weather in 2008.  I ran that year with my buddy Kai, who is blind.  He’d asked me to be his “seeing-eye runner,” but I don’t think I did a very good job.  Thanks to me, he nearly did a face-plant on the infamous “Three Mile Island.”

Three Mile Island is a cement protrusion in the middle of Route 135 near Ashland.  If you’re running in the middle of the pack, or drafting behind another competitor, it’s easy to miss the warning signs and pilons.  Half the runners go right and the other half go left.   If you’re not careful, you’ll smack into the cement wall.

I grabbed his sleeve and yanked him out of harm’s way.

“What was that?” Kai asked.

When Kai was still a teenager, macular degeneration robbed him of ninety percent of his central vision.  Mercifully, the disease left his peripheral vision intact.  And it’s those twin curtains of sight that allow Kai to run with some degree of confidence – to deke left and right, and to find the gaps between other runners.

“I actually feel pretty comfortable running in a pack,” Kai told me.  “I can see the contours of people ahead of me.  So all I have to do is find my opening and keep up with the crowd.”

Although he chose me to be his guide, Kai had no particular interest in being tethered to me by a rope.  Nor was he interested in pinning a bright yellow BLIND RUNNER sign to the back of his jersey.  “Thousands of cute Wellesley girls, and you want me to advertise that I’ve got a disability?” he said.

So we ran side by side.  Kai was worried about slowing me down, but I assured him that I wasn’t looking for a PR.  “I’ve run lots of marathons for speed,” I told him.  “I’m looking forward to actually seeing this race.”

So there we were, two best friends, clipping along at a 3:50 pace.

“Who’s that singing?” Kai asked me at the 10-mile mark.  We could hear a karaoke version of Cracklin’ Rosie.

“There’s a Neil Diamond impersonator standing on the roof of his El Dorado,” I said.  “He’s dressed in leather pants, and he’s doing the Macarena.”

“Hundreds of drunken dudes,” I said.  “Hot girls are lobbing beer cans to the runners.”

As we ran, it occurred to me that this was my true role as Kai’s guide: to animate the lunacy of the race for him.  After all, running Boston is only half the fun.  Watching the crazy people on the sidelines is almost as good.

Before Boston, I’d run a hundred marathons for time, but in retrospect, I’d done those exclusively for myself.  This was the first race where my eyes were fully open.  Ironic that Kai would be the one to give me that gift.

There is a photograph of the two of us completing the race together.  Our arms are raised, and we appear to be laughing.

“Right behind you,” I said. 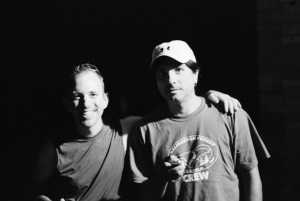 3 thoughts on “Blindfolded in Boston”