You never know what you’ll see when you’re out on a run.

I was having the best run of the year so far, under a Jacuzzi-blue sky, and with golden sunshine slipping like loving arms between the reddening maples.  The country roads were icy and hard, and flocks of little black birds darted from telephone line to telephone line as I passed beneath.  Snow was melting on the fields, and you could see the stubble of the  corn stalks poking through the white.   In the middle of one field I saw a brown bump.  I stopped and stared.  The bump moved.

A cat?  Raccoon?  Maybe a groundhog?

An investigation was in order.

I waded through the snowdrift at the road’s edge, then picked my way through the treeline at the field’s edge.  The snow was crunchy underfoot, and I was sure the animal would run away.  But it didn’t.  I crunched my way across the wind-swept field until I was 20 feet away from the animal. 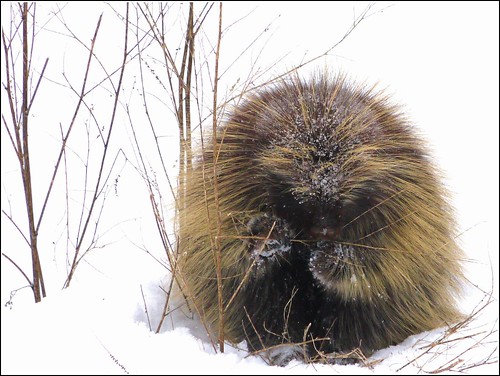 The little porker turned to stare at me for a moment, and then went back to its work, which consisted of pulling up the dessicated stalks, and snuffling about in the frozen soil.  I don’t know what it could have found to eat, but it was definitely chewing on something.

I knelt down.  The porcupine noticed my movement, and stopped chewing.  Then, to my surprise, it started waddling toward me.

It waddled so close, I could have reached out and touched its nose.

I was torn between wanting to cuddle the little guy, and wanting to run for the hills.  The porcupine was incredibly cute, but as you probably know, porcupines have quills – quills that can hurt you.

Suddenly the porcupine made a clicking sound.

I smiled at the porcupine and made a clicking noise of my own:

The two of us squatted there, two feet apart, clicking at each other for a good ten minutes.  Though I was sorely tempted to scoop the little guy into my arms and give him a good tummy rub (which I don’t doubt he would have loved), I was too scared of those silver needles on his back.  Eventually my knees got tired from crouching, so I regretfully stood up and said goodbye.  My little friend went back to foraging for food.

It’s amazing, the things you see when you’re out running.  If I’d been driving in a car, or even riding on a bike, none of this probably would have happened.