Okay Dave, up and at ’em. You’ve got a novel to write. Stop checking Twitter, Instagram, your twelve e-mail accounts, the only good excuse not to write is to CALL YOUR PARENTS, and you connected with them yesterday so that excuse is gone too. WRITE!

Sure, you’ve laid down the beams and struts of your second novel, but it’s not done yet, so you’ve got to GET WRITING! You finished the last draft in March, which means you’ve had 3 months to clear your head. Now you’ve got four precious weeks of holiday and you’ve got to make it count. WRITE!

Still lacking motivation? Think about this. All that crap you spout when you’re signing books for kids? All those motivational messages you scribble on the inside flap? All that: Dig deep / Never give up / Keep chasing your dreams / You can do it! hyperbole... Listen: It’s all true. You can do it. But only if you WRITE! 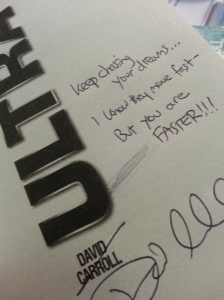 Sure thing. Will do. But! Can I just say that, um, re-writing a novel in the first person, when it was previously in the 3rd person, is, um, HARD! It feels like I’m running a lawn mower over my feet again and again and again. Every time I sit down at the desktop I feel grenades of panic detonating in my spleen. Yes, I squeezed out a novel before, but that must have been a fluke, right? There’s NO POSSIBLE WAY I can do it again.

It feels like someone wove bicycle spokes into my veins. It feels like I’m on a crazy game show where I have to run through a medieval castle populated by ax-bearing zombies.

As usual, running saves me. When I run, new ideas flash though my mind, funny lines of dialogue scorch themselves on my hippocampus.

I’ve logged 100 miles since I arrived here 5 days ago. I run for hours up and down 500-foot hills and I drink aggressively coloured carbonated drinks that dye my tongue appalling shades of turquoise. 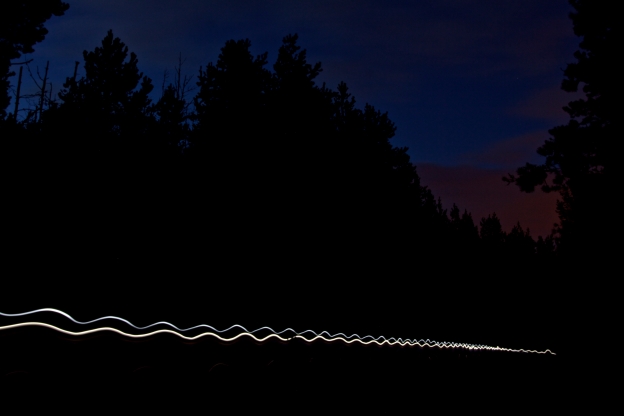 I’ve been meaning to add in some night runs but, well, there are a lot more coyotes out here in these parts than usual. Every night we hear packs of them howling in our forest. They’re inevitably tearing apart some poor animal, and it sounds like a kindergarten class is being disemboweled.

You’ve got to be fearless! Creating art is always a bloodletting. I think of this as I strap on my headlamp and step outside. Only two people in North America have ever been killed by coyotes. Unfortunately, one of them was a writer.