A bit of a miracle really. Two years ago, after ‘Ultra’ was published, I didn’t have a single idea for a follow-up book.

But then I got a phone call. From this woman, Rhonda-Marie Avery:

Rhonda-Marie had read Ultra and liked it. But that wasn’t why she was calling. She’d looked up my bio and discovered that I run ultra-marathons. And she was hoping I could help her out…

Have you heard of the Bruce Trail?  It’s a 900-kilometer footpath from Tobermory to Niagara Falls. It runs along the lip of the Niagara Escarpment, which is essentially a 450-million year old coral reef. It’s incredibly rugged. Home to rattlesnakes, bears, wolves and 100-metre cliffs.

Rhonda-Marie was born with a rare genetic eye disorder called Achromatopsia, which means she has no cones in her retina.

She has only 8% vision. And she decided to run the length of the Bruce Trail – all 900 kilometers of it – to show the world what blind athletes are capable of.

To help her out, she found 50 volunteers from the ultra-running community to ‘guide’ her. I was one of those 50. And it was a fascinating experience. For twelve straight hours, I ran 5 feet in front of Rhonda-Marie, and ‘narrated’ the trail for her. The guide runners had developed this whole language – to help Rhonda-Marie ‘see’ the trail in her mind.

The most important phrase of all was “death to the left!”

We were travelling north to south on the trail, so the life-ending cliffs were always to our left.

Anyway, after 20 days of straight running, and 30,000 feet of elevation gain (basically the equivalent of Mount Everest), Rhonda-Marie reached the end of the trail.

She ran 900 kilometers on one of the world’s gnarliest trails – with only 8% vision!

I was so inspired by this!

But here’s the thing… I shouldn’t have been.

For the past 21 years I’ve been close friends…best friends… with this guy. His name is Kai Black. He’s an executive producer at CBC Radio. He and I created three national radio shows together.

Back when Kai was 15, he was diagnosed with a rare eye condition called Stargardt disease. By the time he turned 18, he’d lost virtually all of his central vision.

Kai is one of the most heroic and inspiring guys I’ve ever known. If you met him on the street, you wouldn’t notice anything unusual about him. Stargardt disease affects the central vision, but it leaves the peripheral vision intact. That means Kai has full mobility, doesn’t use a cane, gets around with little trouble, and sometimes even rides a bike. My brother and I have gone downhill skiing with Kai – zigzagging down black diamond runs at Whistler. My brother simply wore a brightly-coloured ski jacket, which was easy for Kai to see against the snow.

Kai and I have run races together too. This picture was taken moments after we crossed the finish line at the Boston marathon a few years back.

Anyway, I don’t know when it clicked. When I suddenly realized that I had a great idea for a second novel staring me in the face!

Finally I blurted out what I’d been thinking. I told Kai that I had an idea for a new book… And that it was inspired by…uh…him.

“It’s about a kid who gets diagnosed with Stargardt disease,” I told him. “And he’s worried about the future, and he keeps riding his bike even though it’s dangerous, because his bike is his life, and he can’t bear to give it up, because that bike represents his independence.”

Kai thought about it for a minute, and then he nodded and said, “Okay… But it sounds kinda boring. You’ll need some other plot devices to ratchet up the tension.”

So I went looking for a second bit of inspiration.

Do you remember this book? ‘Oranges and UFO’s’ by Muriel Leeson? I bought it out of the Scholastic catalogue in 1975. It’s about a group of kids who get abducted by aliens, and go off to Mars where they have crazy adventures. But here’s the thing: when the kids are on Mars, time stands still! They stay there for months, and when they finally come home, their parents don’t even know they’ve been away.

I loved that! So I merged that idea with my earlier idea – about the kid with the visual impairment. Now I had a main character who was losing his eyesight – only, I had him discover a magical place where time stands still.

I was so excited about this idea. I mentioned it to my editor, Sandy Bogart Johnston. Sandy got quiet for a moment. And then she said, “Are you absolutely sure you want to write magic?”

Early diagram of ‘Perpetuum’ – my land where time stands still.

It turns out writing magic isn’t easy. It’s like building a condo tower. You need architectural drawings, a solid foundation, lots of rebar that nobody ever sees but that holds everything together… Once you’ve got all that in place, then you can wave your magic wand and start having fun… But not before.

Lesson learned. We eventually got the time travel stuff figured out. And by we, I really mean my editor, Sandy.

And there’s the book! It’s in bookstores – and available online – now.

Of course, I never could’ve done it without my guides. Many thanks to Kai Black, Rhonda-Marie Avery, and especially my editor, Sandy Bogart Johnston.

This year’s Haliburton 50-miler shouldn’t have gone well. The previous two weeks had been insane, what with the launch of my new radio show, and the impending publication of my novel. I got 8 hours of sleep in the three days before the race. Also, I was being force-fed a bunch of life’s predictable crap sandwiches.

You know how it is: hidden icebergs of grief, bullet-holes in the drywall, gale-force winds.

Long story short: my head wasn’t in the game. Which is why, in the rush to catch my train, I forgot to pack my watch, salt pills and favourite shoes.

Oh well. Might as well run the dang thing anyway. 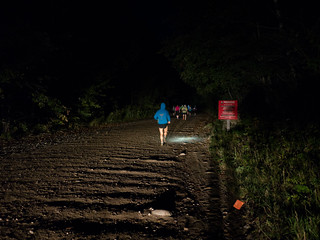 Happily, Saturday morning, the conditions were perfect. Firm trails, and air so brisk you could see your breath. I went out waaaay too fast, but for some reason my body never crashed. Maybe because I ate a TON of food. Potatoes, bananas, gels, and uhhh Clif bars.

Now, I have a love-hate relationship with Clif bars. I hate it when I eat them, and I love puking them up.

Seriously – Clif bars are tougher to gag down than soggy woolen mittens. Sure, they have calories, but it’s like swallowing a Christmas sweater.

Luckily, at aid station 5, after trying to coax a third oatmeal-mohair bar down my throat, a fellow runner gifted me a packet of tangerine Gu chomps. Have you tried these chomps? OMG. It was like the Book of Genesis unfolding on my tongue.

I bounded up hills I’d only walked before. I was a gazelle, a dik-dik, a Kangaroo Rat. The only hills I didn’t run were the diabolical three ‘sisters’ between Ben’s Trail and The Pass, and that 300-foot monster at the start of the King and James trail. 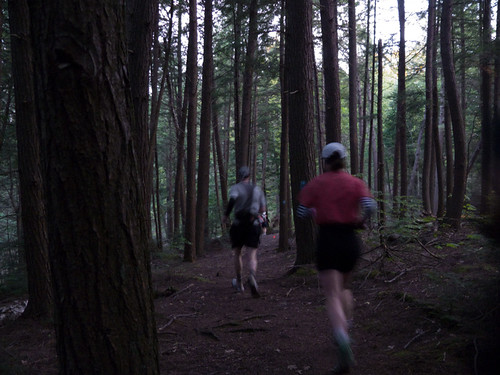 I had no right to be running this well. But sometimes runners get lucky, and wind up in Opposite Land. If you’ve been running for any length of time, you’ve probably been to Opposite Land. You train and plan meticulously for months, and yet, when race day comes, everything falls apart. Other times, even if you’ve been eating nothing but Pocky and crying your eyes out every night, you can still – for some inexplicable reason – exceed expectations.

Opposite land. That’s where I was. So I kept running hard. No part of my body complained.

I ran into old friends at aid stations and stopped for hugs. Those friends gave me more energy than a dozen boiled, salted potatoes. 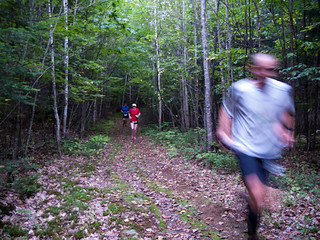 Shawna asked me what I thought about during this run. I told her I didn’t think about anything at all. Maybe my mind was too blasted from the radio show or the book or the drive-by shootings in my mind. Yes, it felt like the whole world was crashing down, but out here on this trail, I was in complete control. For nine hours, my whole existence was a dusty brown ribbon, two feet wide. It was that simple. Just keep running. Everything else will unfold as it should.

As usual, the trails were storybook pretty. Tree trunks as thick as elephant legs, and leaves that rattled in the breeze like twenty dollar bills. When I got to aid station 4, ten miles from the finish, I asked a volunteer for the time. I was delighted by her answer. I had a shot at breaking 9 hours. I ran on, and started to fantasize about the finish line. What would I do when I got there? Turn my usual pirouette? Do a couple of cartwheels? Or should I moonwalk? Hmmm.

My parents were there, cheering wildly. And the moment I crossed the line, I realized my mistake.

Instead of racing straight across the fline, here’s what I should have done:

That’s what I should’ve done. Because all of my victories – deserved or not – are entirely thanks to them.

That’s what I learned from Opposite Land. Calories only push you so far. Heart pushes you further.