Running has given me so much over the years.  My health, lots of crazy adventures, a clusterbomb of crazy friends. But running gave me another life-changing gift – one I hadn’t thought much about until today.

Years ago, before I took up running, I was one of those people who hated winter.  I spent five months of every year feeling vaguely depressed, and waiting for April to roll around.

Today it’s minus fifteen outside the cabin. Six inches of hard-pack snow lie on the ground. A howling northerly whips ice pellets through the forest, so of course I think: Time for a run!

I pull my tights over my long-johns. Yank on two pairs of thermal socks, then my Nikes. Compression top, followed by 3 dry-wick jerseys. Running jacket with drawstring hoodie. Two hats, one neck-warmer, one MEC neoprene face-shield, lobster claw gloves.

I step outside into the howling gale. Run down the concession, straight into the wind. The snow rises up like sheets of vinyl siding, and pours through the woodlots in dry white rivers. Ice pellets hit my forehead like they’ve been fired from a staple gun and then they’re welded to my eyelashes like pebbled glass.

I run on a mountain bike trail named HolyFBalls. It’s a brute at the best of times, and the snow only makes it tougher. And yet – wrapped in my cocoon of synthetic fibres, I feel the bodychoke of winter, but not its cold bite. The world looks more beautiful than a brand new iPhone, and instead of feeling depressed, my heart explodes like a confetti cannon. 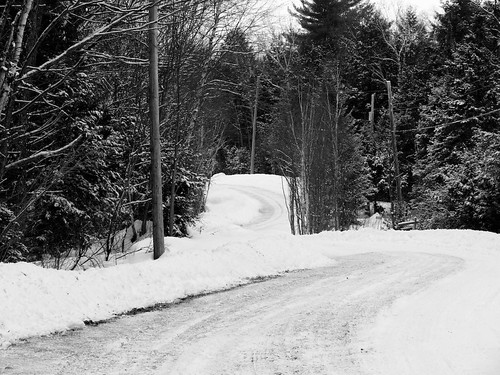 This is the greatest thing running gave me. It coated my heart with crystal water. It made me love winter.