How do authors come up with their characters? We dream them up in our heads, right?

Sorta. But not exactly.

If you’ve read my novel “Ultra” then you already know that the main character is a 13 year-old kid named Quinn. But here’s something you may not know: I have a nephew who’s also named Quinn.

There he is. The boy who inspired the character. He’s just a tiny kidling in this picture, but he’s 12 now.

So – how did that adorable little kid inspire the tough-as-nails ultra-runner in the book?

Easy. He’s super-fit. He’s wickedly funny. And he’s determined as anything – just look at those clenched fists! Also, my nephew loves the outdoors, and is always chasing after animals. Which is why, in the book, Quinn is always running into frogs and turtles and, er, bears. 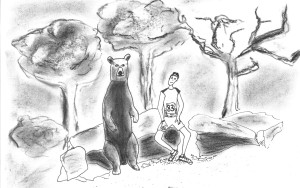 Illustration (by Shawna) from an early version of the book

Unlike the character in the book, however, my nephew isn’t all that keen on running. (He’s far more interested in soccer and hockey.) And unlike his brooding namesake in the book, the real-life Quinn is most definitely NOT a fun vampire. He’s actually the opposite. More like a fun volcano. 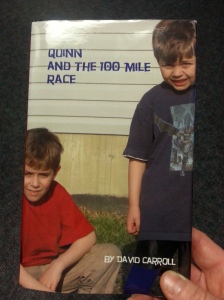 That’s an early version of the book. Back then it was titled “Quinn and the 100 Mile Race.” That’s Quinn on the right, and his big brother Kiernan on the left. And yes, Kiernan inspired a character too.

At the bottom of page 86, a tough old guy named Kern comes ambling down the trail. He’s what’s known in racing circles as a “bandit” – someone who runs the race illegally. But this bandit isn’t evil. Quite the contrary – he actually ends up saving Quinn’s race.

I wrote Kern into the story as a tribute to all big brothers and sisters. As annoying as they can be on occasion, elder siblings can be life-savers. My own big brother rescued me from near-death countless times. I don’t doubt that Kiernan has done the same for Quinn.

Also worth nothing – Kiernan is an awesome hockey player. So I decided to make the “Kern” character a former hockey great. Like my nephew, I made him a goalie. In my mind, he was a superstar with the Alberta Junior Hockey League.

This is the best thing about being an author. You get to put all the people you love in a book. I’m especially lucky, since I have 40 neices and nephews to write about.  Like the one below.  Any guesses which character she inspired?

One thought on “You’re the Inspiration!”